By means of the representation of the temperature distribution on the surface, building thermography allows to find out the energy weak points and thermal bridges, that is areas on the coating of the building with increased thermal losses and the places lacking density. The creation of images from the thermal picture of buildings is the quickest and the most effective method of visual representation of the overall energy condition of the coating of the building, and this is done in a non-destructive manner, at that. The causes for the increased energy consumption can also be found out, thus helping to plan measures to economize energy and carbon dioxide and also to introduce the necessary modernization. And by the way, the costs incurred in doing the thermography of a building are a good investment.

A typical camera is unable to show the thermal condition of a tea cup.

Only with the aid of an infrared camera, the thermal radiation of the tea cup becomes visible.

The infrared picture to the right is typical of a non-rehabilitated one family house from 1970. The entire outside wall of the house has not been thermally insulated, which can be seen very well from the uneven distribution of the temperatures. Especially high surface temperatures can be seen in the areas of the niches for heating appliances, the ceilings of the floors. The windows correspond to the level of technology existing at that time. Besides, the roof surface and the ceiling of the basement are not insulated. The heating and the warm water are carried out by means of a low-temperature boiler burning natural gas. The calculation of the need in energy in accordance with the energy economy regulation has produced the following values: 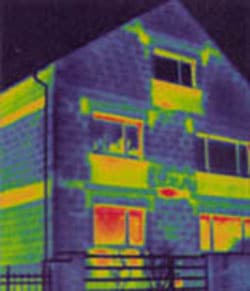 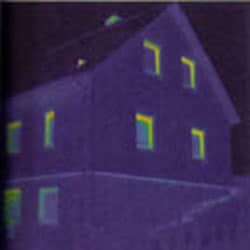 Based on this picture, we can understand very well what consequences could a well done insulation have. A thorough modernization of the coating of the building has been undertaken. Thanks to it, the thermal losses in the areas of the niches for heating appliances and the ceilings of the floors have been removed. The new in-built windows meet the modern building and construction requirements. The energy consumption was additionally diminished by installing a device with effective burning values for the natural gas. The preheating of the hot water is assisted by a thermal solar outfit.

Insulation materials have been used in the areas of the roof, walls, the basement plates, and the roofs. What comes immediately to people’s minds in this case is the word “styrofoam”. This. In fact. Is just a trade name of the material penopolystyrol. Apart from the chemically produced materials, however, there is a large number of environmentally friendly insulation materials from naturally renewable raw materials. The estimate below shows that their current rate of use is only as low as 4 %.